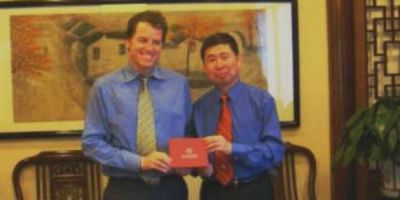 On April 9, 2009, Mr. Jack Hurd, Asia Pacific Region Director of Forest Program of The Nature Conservancy (TNC) and Chief of Party Responsible Asia Forest &Trade Program(RAFT) visited the Secretariat of Asia-Pacific Network for Sustainable Forest Management and Rehabilitation(APFNet). Mr. Qu Guilin, the Director-General of the Department of International Cooperation, State Forestry Administration, P.R.China and Director-General of APFNet met with Mr.Hurd and his colleague.

The Chinese side first introduced the background of the APFNet and its mission, priority areas and work plans of 2009, Mr. Qu Guilin expressed his thanks to TNC for their support provided during the preparation and launch of the APFNet. Both sides also reviewed previous cooperation and exchanged their views on the practices of sustainable forest management in the Asia-Pacific area. In addition, Mr. Jack Hurd briefly introduced the background，and preliminary ideas for the implementation of the RAFT program in China. He expressed his wish to carry out further cooperation with APFNet within the framework of RAFT in order to promote responsible timber trade and sustainable management of forest resources in Asia Pacific Region.