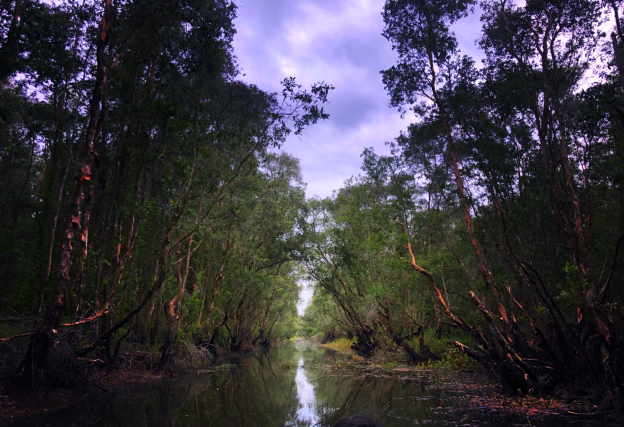 Tram Chim National Park is a Ramsar site of exceptional value to birds and other wetland-dependent species.
In Tram Chim National Park, a Sarus Crane, one of the most famous sacred birds of Viet Nam, rises from the ground to hunt for insects and frogs. It is one of the few remaining ones in the National Park. Over the past few decades, issues with water quality and management, as well as forest fires have led to a steady decrease of the population in Tram Chim, as both their sources of food, as well as their habitats have been threatened.
Less than 150 km to the east of Dong Thap Province, where the park is located, a group of people, consisting of key representatives of the National Park Management, researchers from the Forestry Inventory and Planning Institute (FIPI) of Viet Nam and the Forest Resources and Environment Center, the head of the Dong Thap Forest Protection Department and Dr Lu De, the Executive Director of APFNet arrived at the same moment, not only to help the Sarus Crane, but also to improve overall national park management and knowledge. On Thursday, 12 September 2019, this group officially signed an agreement for the project “Integrated Forest Ecosystem Management Planning and Demonstration Project (IFEMPDP) in the Greater Mekong Subregion (Tram Chim Project Site)”. This project is part of a larger series of APFNet IFEMPDP projects in the Greater Mekong Subregion aiming to address conservation issues through integrated management and planning. Mr Nguyen Nghia Bien, Director of FIPI, expressed his delight that after many years of preparation the vision will finally be realized. 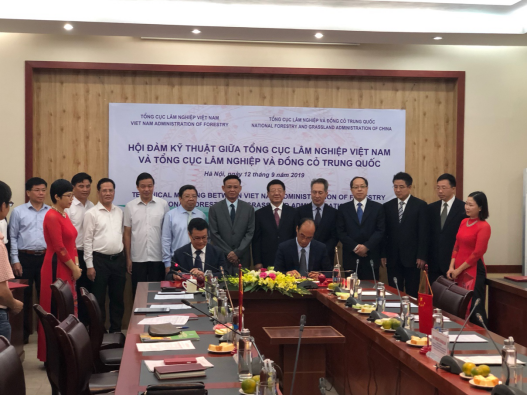 Project agreement signing between APFNet and FIPI, witnessed by MARD (the Ministry of Agriculture and Rural Development).

Tram Chim national park is one of the most unique sites, as it is the only national park and the only wetland in the project series. One hundred percent wetland, it forces partners to look beyond just trees to what factors are affecting the landscape and its inhabitants. As such, despite illegal logging and poaching, issues commonly found in forestry, the focus had to shift more to acquiring more information in order to sufficiently assess habitat conditions and create ways for people and the national park to sustainably co-exist. As a result, contributing to a sustainable management plan for the park will be one of the key focuses of the project. This, however, is far from the only way the project will make a positive contribution.

Tram Chim National Park, while itself rather undisturbed, is surrounded by large canals that themselves are bordered by local residential houses. “You see, local people here, whatever they throw into the canal can easily influence the park as it's the same water. We don’t know, however, what is currently in the water and how it influences its quality. That’s why it’s important to gather water quality data from the surrounding canal, so we can make tailored management recommendations,” said Nguyen Huy Thang, the Project Coordinator, during the field visit following the workshop. As a result, throughout the project not only water quality in the canal, but also soil quality and biodiversity will be monitored regularly in both dry and wet seasons.

Watching out for birds and fire

Some of the greatest (and perhaps most unexpected) threats to a wetland can be fires – they destroy habitats, can pollute the water and change the ecology at large. In order to monitor fires and give visitors opportunities for bird watching, a 50-metre high bird observation tower will be constructed. While there are different observation towers at the park already, most of them are rather low and give only a limited overview of the park area. “When we use the other towers our field of view is perhaps only a few kilometers in each direction. With the new towers, we would be able to monitor virtually the entire park from one spot and detect fires immediately,” Mr Vu Tien Dien, the Project Director, explained during the inception workshop. APFNet has done this in other projects, where the forest watcher system, a high-tech system to automatically detect forest fires, has been installed (see here and here). 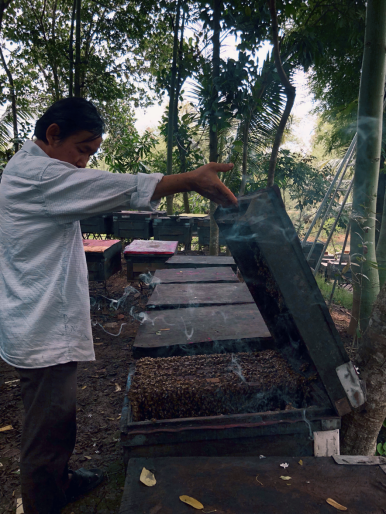 Beekeeping is a great alternative livelihood.

While protecting habitats and conserving species is incredibly important, living right next to a national park is for many local people a difficult endeavour at best. Many common practices, such as agriculture, fishing or harvesting timber are prohibited. Recognizing that problems with local residents cannot be fixed by a mere “ban” policy, the project will support local people develop alternative livelihoods to foster the need for integrated approaches. Selected households will learn how to grow and harvest water lilies, lotus, create local products through weaving or raise bees to sell honey. Mr Le Thanh Cu, the Deputy Director of Tram Chim National Park, emphasized that within the project they will strive to create as many synergies as possible. For instance, lotus stalks can also be used for weaving and the resulting products are in very high demand.

Overall, the vision is to not only witness rises in populations of Sarus Cranes and other species in the park, but through the project activities watch their populations soar. Tram Chim can and deserves to be a prime example for integrated wetland management.