APFNet shares details of the study on Fragmentation of Forest Governance in the Asia-Pacific Region
Governance is key to contributing to sustainable forest management and its position in high-level planning and execution nationally and internationally; however the governance of forestry sectors is fragmented in many economies in the Asia-Pacific region. As APFNet develops materials that target different groups in society, including high-level political bodies, to keep them informed, motivated and supportive of what APFNet stands for and of its projects, the APFNet team shared details of a recent study on “Fragmentation of Forest Governance in the Asia-Pacific Region – Expert Perceptions from China, Malaysia, Indonesia, Nepal and Vietnam” during the Fourteenth Session of the United Nations Forum on Forest held in New York City in May, 2019. 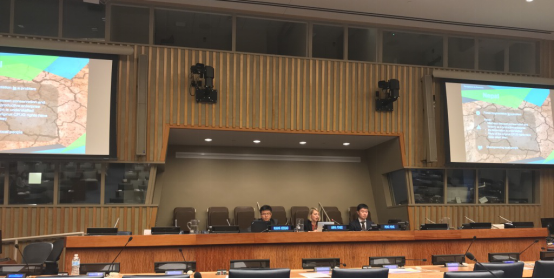 Reporting team from APFNet: Mr Peng Peng, Ms Anna Finke and Mr Huang Kebiao.
This study traces the emergence of theories of governance fragmentation that ran in parallel to major processes of sociopolitical restructuring that have occurred since the 1970s, often in response to economic movements emanating from dominant economies and the institutions formed post-WWII to promote global coordination of finance, trade, economic development and eventually broad social and environmental interests.

These theories of fragmentation relate to forest governance fragmentation (FGF) as they pertain to the allocation of duties and powers across spatial delineations, sectoral jurisdictions, political or administrative scales, governance functions, governance systems and higher-level norms and the institutions or regimes that have emerged to forward them.

Based on a survey of perceptions of forestry experts and researchers from five Asian economies (China, Indonesia, Malaysia, Nepal and Viet Nam), this work attempts to better define the issues of forest governance fragmentation as they relate to real-world outcomes and concerns. Around 120 experts across these economies responded to questions relevant to the qualitative dynamics of FGF defined by political boundaries, land-use designations and forest-type classifications; land, natural resource, fiscal and tax sectors; public and private institutions; global, national, local and community scales; political, legislative and enforcement functions; statutory and customary governance systems (including indigenous systems); and a range of normative and institutional interests such as conservation, biodiversity, timber production, carbon mitigation and socioeconomic development.

While results for the respective economies differed significantly from each other, some overarching patterns could be identified: While it seems that national forest policies do provide a comprehensive framework for forestry-related questions, there is still insufficient cooperation on sectoral and scalar levels, as well as between forest authorities and local or indigenous groups. The study could draw no clear conclusion on whether forest governance decentralization or centralization was a better approach in general; this highly depended on the context of the respective economies.

For more information, please refer to the full study (link given below).
http://www.apfnet.cn/en/uploads/soft/20190515/1557895235.pdf
Announcement for the International Training Course on Forest Resource Remote Sensing Monitoring for Economies along the ‘Marine Silk Road’
Mr Zhao Shucong meets Dr Joze Podgorsek, the State Secretary of the Ministry of Agriculture, Forestry and Food of the Republic of Slovenia