Desertification is a looming threat in many parts of the world. More than a billion people are affected by desertification, with many living in Greater Central Asia.
Horqin Sandy Land is one of the four major sandy lands in China across the three provinces of Inner Mongolia, Jilin and Liaoning. It is a fragile and sensitive agro-pastoral ecotone in China, mainly located in Inner Mongolia (92.4 percent).
With about one-third of Inner Mongolia classified as desert and more than one-third categorized as degraded land, the fight against desertification is one of the key issues in the area.
Since rural reforms in the 1980s, both state and local governments in China have devoted great efforts to combating desertification through a number of eco-environmental restoration campaigns. Significant achievements have been made but there is still a strong need for new reforestation models that sustainably fight desertification, as well as methods to increase the production of local non-timber forest products without negatively impacting the land.
Like a number of other communities in the Horqin Sandy Land, the people of Aohan Banner are affected by desertification, living in a harsh environment with a underdeveloped local economy and poor living standards. It is a focal area for desertification prevention and control efforts in China. Measures applied here can often be used in other regions facing similar problems in Greater Central Asia.
From 2017 to 2019, APFNet, in cooperation with the Sanyijing State-owned Forest Farm in Aohan Banner, Inner Mongolia, initiated a demonstration project to address these issues. The project analysed typical approaches for desertification prevention and control in Chifeng and provided practical examples of forest restoration. It demonstrated high-quality vegetation restoration in sandy lands using different afforestation models, as well as showcased a selection of economic tree species, suited to local conditions, to improve forest stand quality and provide multiple benefits. Finally, it also demonstrated combination planting of economic and medicinal species with timber tree species to diversify local income sources.
Forest vegetation restoration is a long-term, continuous process, in need of constant efforts. Starting in 2020, the project entered its second phase. The total budget of the project is USD 1,456,000, of which USD 1,148,000 will be granted by APFNet, and USD 308,000 will be contributed in cash and in-kind by the executing agency and supervisory agency.

Defeating the Yellow Dragon
Sanyijing Forest Farm has used the native poplar tree as its main afforestation species for many years, which resulted in a lowering of the water table as the trees consume relatively high amounts of water. As the eventual lack of water also affected the health of the trees themselves, they were plagued by frequent pests and diseases, which led to degradation and even death of shelter forests in the project area.
Based on the successful experience of using different tree species and restoration approaches in Phase I of the project, Phase II will further demonstrate a range of restoration and rehabilitation models that enrich the biodiversity of forests and improve the overall quality of the forest ecosystem. Phase II encompasses a total area of 230 ha and includes the establishment of 72 ha of forest restoration demonstration areas on semi-arid lands, a 10 ha sandy tree species demonstration garden featuring 80 common species adapted to sandy lands, and the improvement of 39 ha of existing degraded poplar forests by inter-planting with other species.

Restoration Model 1: Mongolian pine (Pinus sylvestris var. mongolica) mixed with Siberian elm (Ulmus pumila) on 6.67 ha of sandy land. This restoration forest will be planted in the form of a shelterbelt, where six rows of Mongolian pine (4 ha) are followed by four rows of elm (2.67 ha). This planting pattern forms a windbreak and effectively fixes sand and dunes. 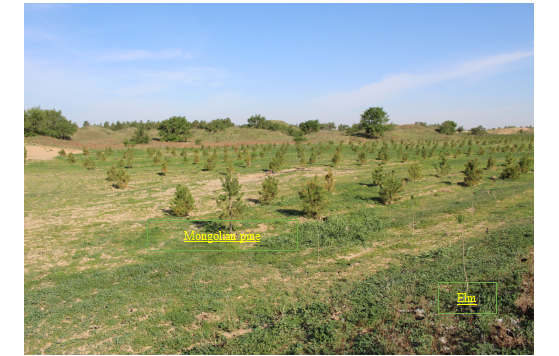 Restoration Model 2: Mongolian pine mixed with goldleaf elm (Ulmus pumila variety ‘Jinye’) was planted along a highway. Similar to the previous model, the planting was arranged as a shelterbelt, with four rows of Mongolian pine (6.67 ha) and two rows of goldleaf elm (3.33 ha) to form a windbreak and fix sand. Restoration Model 3 : Mixed coniferous and broadleaf trees on 55.67 ha of semi-arid land, all planted in square plots with one species acting as a shelterbelt, the other species fixing sand inside the shelterbelt.

Figure 4: Before (left) and after (right) planting of mixed coniferous and broadleaf trees on semi-arid land

In addition, a 10 ha demonstration garden featuring about 40 common sandy tree and shrub species will be established.

Figure 5: Before and after the establishment of demonstration garden

Rehabilitating degraded forests
There are 4,202 ha of pure poplar forests in Sanyijing Forest Farm, most of which are degraded, consisting of small old trees with severe die-back. Field investigation shows the damaged forest stands are mostly in clusters covering large areas but with several gaps.
Using the principle of avoiding logging of existing trees, different tree species were planted underneath the dominant poplar species. Species chosen were drought- and cold resistant with a strong capacity for wind break, as well as soil conservation and sand fixation in arid and semi-arid desert areas. Overall, three different models were showcased:
Model 1: Demonstration conversion forests (13.33 ha) in a shelterbelt formation using Chinese pine (Pinus tabuliformis) and yellowhorn (Xanthoceras sorbifolium), including 6.67 ha newly afforested and 6.67 ha of old plantation kept as a comparison area.
Model 2: Demonstration conversion forests (13.33 ha) with enrichment planting in shelterbelts using Mongolian pine and David peach, which includes 6.67 ha of newly afforested area and 6.67 ha of old plantation kept as a comparison area. 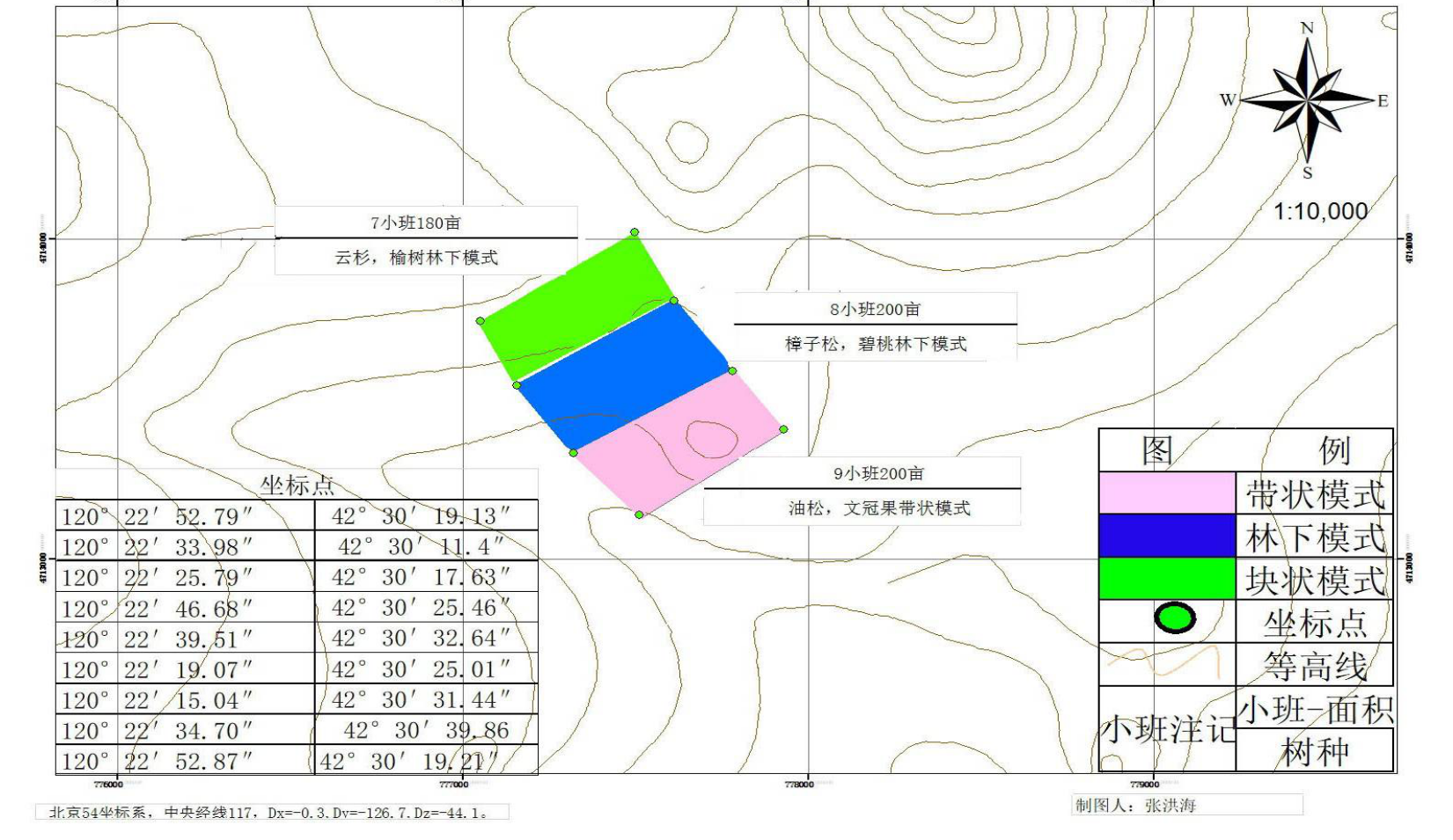 Furthermore, during Phase II, the 109 ha demonstration forest (30 ha pure restoration, 79 ha economic forest) established in Phase I will continue to be managed and monitored.

Building an exhibition room to showcase desertification prevention and control achievements
In Phase II of the project, an exhibition room of 500 m2 will be built to showcase desertification control achievements and techniques, as well as highlight the experiences of APFNet, Aohan Banner and Chifeng Municipality. The construction will be completed by the end of 2020.


Achievements will be displayed through a variety of multimedia, including an LED screen with audio and video, exhibition boards and pictures. The site will also be a meeting place for regional exchanges on desertification. 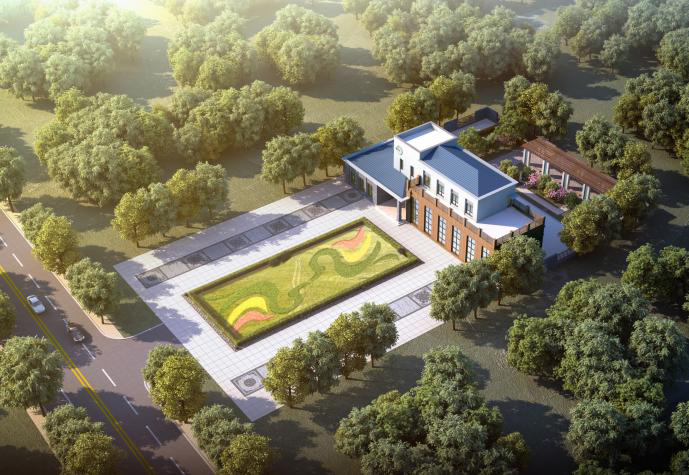