15.Supporting community based sustainable forest management and economic empowerment of Women in Central Region of Nepal


Women throughout the world, but especially in developing countries, have long been led to believe that they do not have any power. However, as Alice Walker, a famous writer, once said: “The most common way people give up their power is by thinking they don’t have any.”

Empowering rural women to take ownership of their lives, improve their own livelihoods and enable them to learn new skills is an internationally recognized goal captured in the Sustainable Development Goal 5 to “achieve gender equality and empower all women and girls”.

In Nepal, both women and men are strongly dependent on community forests for their livelihoods, however women use the forest primarily for meeting subsistence needs and men tend to manage the commercial activities that leads to greater economic independence.

Thus in Kathmandu, Makwanpur and Sarlahi districts, central Nepal, APFNet and the Himalayan Grassroots Women’s Natural Resource Management Association (HIMAWANTI) together with the Nepali Ministry of Forest and Soil Conservation, has taken on the challenge to empower local women by teaching them how to sustainably manage their community forests while also developing new handicraft enterprises and promoting ecotourism.

The key to managing forests sustainably is removing timber with the least impact as possible. Thus, 130 people were trained on low-impact harvesting and logging techniques, specifically designed for women. On established demonstration plots, weeding, pruning and “3D extraction” (dead, decayed and diseased trees) techniques were demonstrated as well.

Getting women into business
Empowering women also means to empower them economically. Getting women into business not only leads to higher incomes, but helps them to acquire new skill sets that make them more independent and with which they can support their families. In this project, women in different regions of Nepal learned three different ways to improve their livelihoods: making wooden handicrafts, setting up community-based aromatic herb enterprises (citronella, pamarosa, mentha and lemongrass) and earning money through ecotourism.

“Now, neighbours call me entrepreneur”
Sarita Lama is a 38-year-old married woman, mother of two sons and one daughter, and member of a handicraft microenterprise in Makwanpur, central Nepal. After sending her children to school, she goes to the Piple Pakha Community Forest User Group to make wooden handicrafts, something she has now been doing for two years. 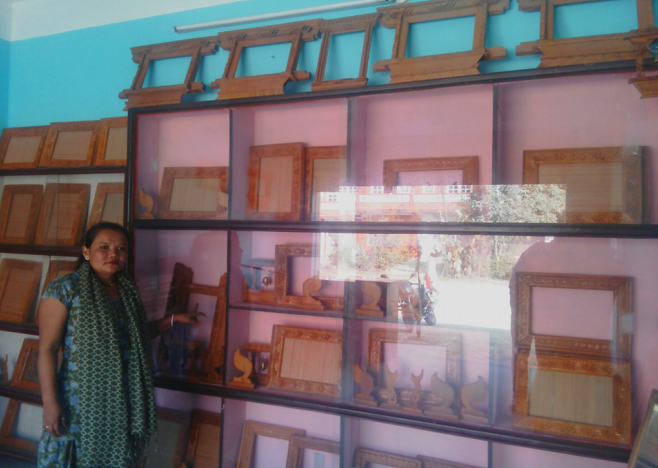 Previously she made a living carrying bricks which was extremely exhausting and bad for her health. Although she worked very hard every day, the income was low and it was still very difficult to afford her children’s education. Wanting to learn new skills and improve her income, she joined the Piple Pokhara Community Forest User Group two years ago and was selected for wooden handicraft training, the first round of six months of basic training. Showing a strong work ethic, she then completed a five-month advanced training course, specializing in producing wooden frames. Sarita also continued working with the community forest user group, undertaking a variety of jobs, such as helping to cut logs and designing frames based on customer specifications.

The frames are sold by the community forest user group and the income is distributed to members from a group bank account. One of Sarita’s proudest achievements was when her handicraft was chosen to be exhibited during World Wood Day in 2015.

7.Pilot Project of Multifunctional Forests
41.Reconstruction and sustainable management of degraded forest based on the combination of inter-planting nitrogen fixation rare tree species and thinning