33.Enrichment of pine plantations with native species in Sri Lanka 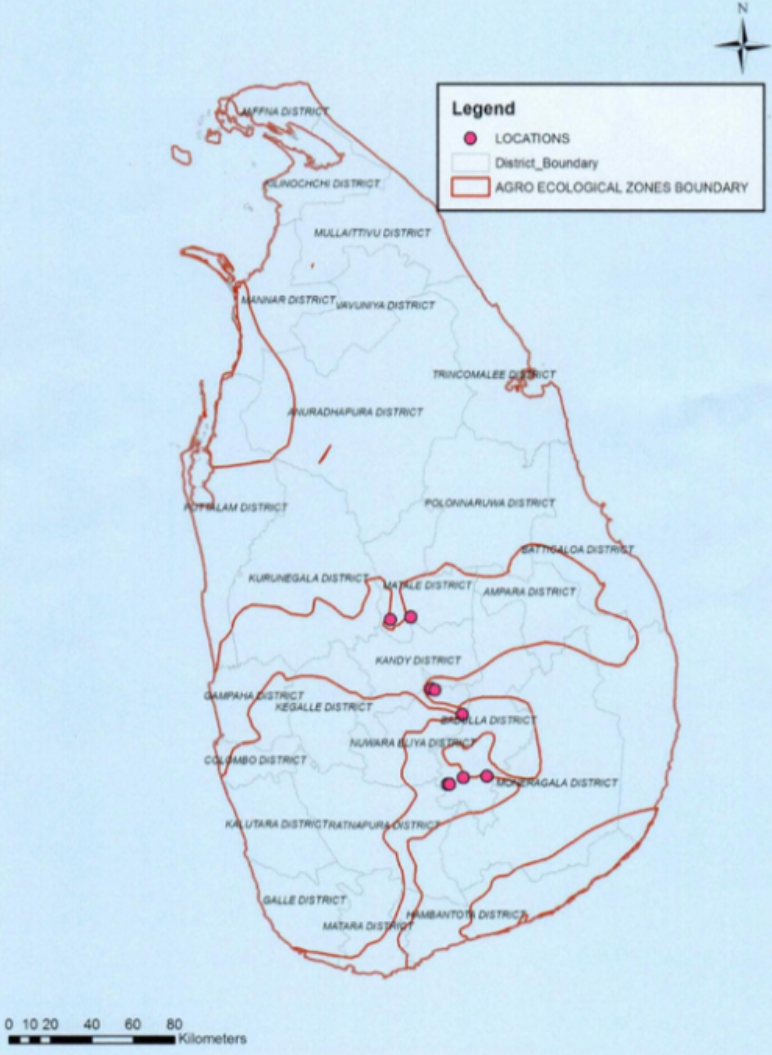 Introduction
Sri Lanka is an economy known for its tropical wet evergreen forests and a variety of montane forests. The average annual precipitation lies anywhere between 2,500 mm in the wet zones and 1,250 mm in the arid zones, with the dry season lasting up to seven months of the year. Historically, large parts of these forests have been converted for agricultural use. Due to deforestation and the partial aridity, the deforested areas, even when abandoned, often did not revert to natural forests but stayed in a successional stage consisting of grasslands and fern thickets. Earlier reforestation attempts using native vegetation have failed as the prevalence of fire and degraded soil conditions have made it impossible for the shade-adapted and fire-intolerant native species to survive.

Acknowledging that native forests cannot be brought back instantly with local species at hand, the Sri Lanka Forest Department started using the exotic pine tree species Pinus caribaea from northern Central America, amongst others, to reforest the degraded grasslands. These exotic trees were incredibly successful compared to native vegetation, having originated from a historically fire-dominated ecosystem and were therefore adapted to fire, greater light conditions and degraded soil. Over 16,000 ha of pine plantations were established. From a timber perspective, these trees provided great economic value, but lacked biodiversity and ability to exclude fire. With support from APFNet, 350 ha of these plantations will slowly be converted into multi-species and multifunctional forests, closer to the original natural composition.

Creating multi-species forests to get multiple benefits
In Sri Lanka, approximately one-quarter of the pine plantations are located in watershed areas with steep slopes and are vulnerable to soil erosion and forest fires. The project selected three representative locations – Badulla, Nuwara Eliya and Matale – to implement strategies for successful conversion of monoculture plantations into multi-species forests.

However, as described earlier, successfully reintroducing native species in currently fire-dominated landscapes can prove to be difficult, if those species are not adapted to such a regime. Furthermore, the current environmental conditions in the plantations may further inhibit restoration. Thus, two key measures need to be adopted:

Fighting fire with attention and awareness
As most fires are started by people, the project aims to ensure that no more human-caused forest fires will break out. Creating awareness among local communities about the damage forest fires can cause is most important. The project will establish firefighting groups that can quickly prevent and detect fires; and fire lines to prevent fires spreading. Specialized “vigilant groups” consisting of forest officers, other government officers and community members will be formed, trained and equipped appropriately.

First, the canopy needs to be opened up to promote natural regeneration. Using a combined approach in different areas, between 30–50 percent of the canopy will be removed using different harvesting and thinning styles. Strip felling with different strip-widths (10–20 m) will be tested in one area, while in other areas that already have some natural regeneration, selective cutting of trees will be applied.

Second, in the strip-felled areas, up to 600–800 seedlings, a mix of pioneer species, late successional species but also fire-resilient and fruit-bearing species, will be planted per hectare. This is not only to give forest regeneration a “jump start” but also to ensure that the future forest will be more resilient and present multiple benefits, such as the provision of non-timber forest products for the community.
Demonstrating the development and application of standing-tree carbon equations to improve the accuracy of forest cover carbon stock estimates in Thailand
32.Community tree planting project