Introduction
Cities are often compared to jungles, yet few actually have any real jungles, especially the rapidly growing cities in Southeast Asia. Yet, located in the centre of Thailand’s capital Bangkok, the small island of Bang Kachao contains a true “urban jungle”, a last survivor from urban expansion in the lowlands of Bangkok’s central plain. Approximately 2,000 ha, this island has the potential to be a major demonstration site for urban forestry in Southeast Asia.

In 2008, the island was nominated as a major site for demonstrating the urban forestry programme of Thailand’s Royal Forest Department (RFD). RFD established the 30-ha Nakhon Khuan Green Area and Eco-Management Centre in Srinakhorn Khuan Kahn City Park on the island. However, many activities, such as biodiversity conservation, ecotourism and site maintenance, were limited by a lack of facilities. The area was not developed as a tourist attraction or provided significant revenue for local residents.

Consequently, APFNet funded a project at the Bang Kachao Biodiversity Conservation and Natural Learning Centre to develop capacity building programmes and promote ecotourism to improve livelihoods and biodiversity conservation. The long-term goals were to build the local community’s knowledge of biodiversity conservation to sustainably utilize and conserve natural resources; and develop ecotourism to increase local incomes. Successful project activities will also be used as a model to apply in other areas of Thailand and elsewhere.

Establishing demonstration and learning sites
An exhibition and interpretative centre was built to provide information about the area to visitors. Highlighting interesting stories about local cultures, norms and other unique features, the exhibition encouraged visitors to understand the special values of the area. On-farm activities were created to demonstrate agroforestry and related practices. Local school children were educated on natural resource conservation, forest protection and local forest products by visiting the demonstration sites during special “camps”, such as art camp, social camp, sport camp or general learning camps. Local volunteers and youth groups were invited to work within the natural conservation and urban forestry capacity building programme at the interpretative centre. RFD experts provided long-term technical support on urban forest management, including how to improve forest ecology, ecotourism management and promotion; and reduce threats to the forests.

Establishing the site as an ecotourism hotspot
Improving local incomes through ecotourism is one tool to decrease community pressure on the forests and swamps of the island. Three strategic development activities included building new facilities, developing marketing programmes and training local guides. 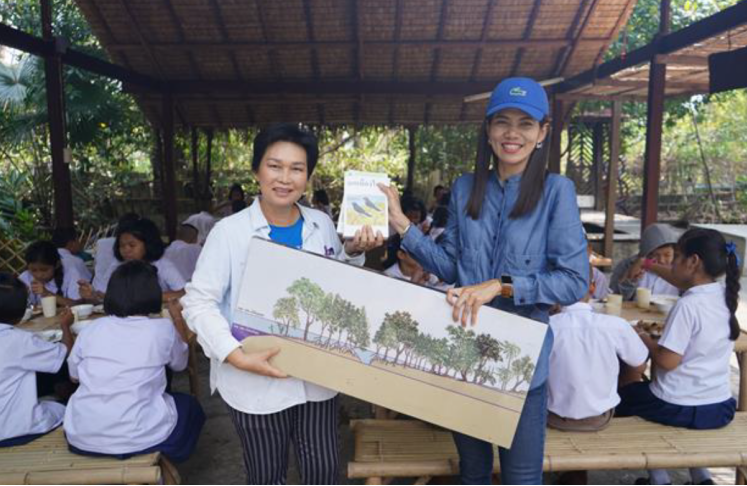 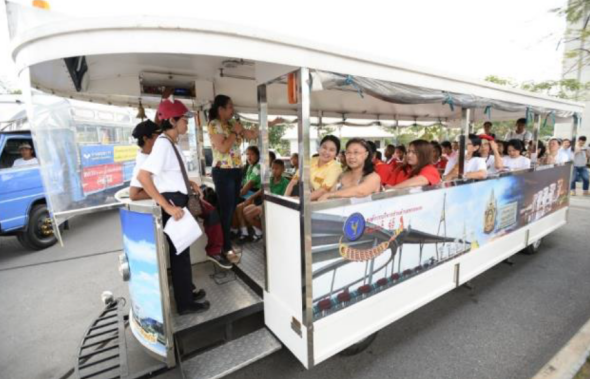 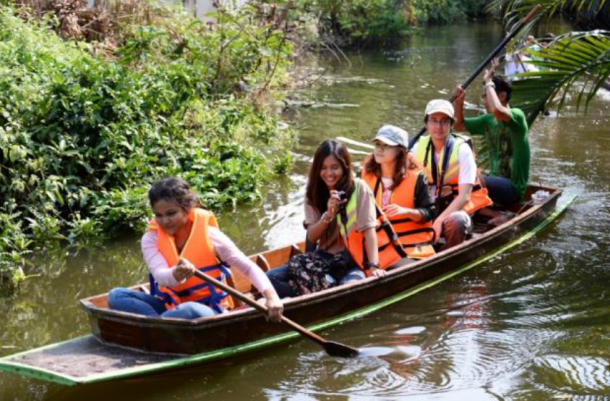 Using urban forestry to improve habitats
Ecotourism sites should be comparatively rich in biodiversity and, more importantly, the habitat should reflect what is commonly understood as “natural” for the area.

Given that much of Bang Kachao has been used by local people for coconut plantations and other agriculture, it was important to restore the original flora and fauna of the area. The water is brackish in many parts.

First, plant and bird species were surveyed, and forest structure and species composition were analyzed. Based on these results, bird watching sites were established. For birds and other endemic fauna already present, feeding programmes were established to ensure their continued survival. Rather than simply providing food, the project sponsored a programme to plant fruit tree species such as Syzygium cumini, Flacourtia rukam, Lepisanthes fruticosa, Mangifera pentandra and Artocarpus heterophyllus to attract fruit-eating birds, and small animals. Flowering tree species, such as Hibiscus schizopetalus, Barringtonia acutangula, Hopea odorata, Sonneratia caseolaris and Rhizophora apiculata were planted to attract insect-feeding birds and create a tourist attraction all year round.

Sediment at the bottom of waterways was removed to improve water quality and local fish species were reintroduced into the clearer water.

To balance the potential impact of increasing numbers of visitors on biodiversity, a biodiversity management plan and local genetic conservation sites were developed to protect endemic flora and fauna species. Through a collaboration between scientific institutions, schools and local communities, a species database was created. Biomass production and carbon sequestration were measured by establishing and measuring permanent plots.

The project has created an important demonstration site for urban forestry in Southeast Asia. The development of a conservation and urban forestry programme with community-based ecotourism showcases how conservation and livelihoods can be combined in an urban setting in a developing economy. The collaboration of local communities and other partners plays a vital role in ensuring the long-term sustainable use of biological resources and the conservation of biodiversity in urban community forest settings.
34.Development Participatory Management of Micro Catchment at the Bengawan Solo Upper Watershed
45.Establishment of a High Value Tree Species Breeding Center in Cambodia