Initiating a new phase for the project ＂Adaptation of Asia-Pacific Forestry to Climate Change＂
In December 2021, the third phase of the APFNet project "Adaptation of Asia-Pacific Forestry to Climate Change –Phase III Synopsis, updating and extension of forest adaptation tools" has been signed and the project was formally initiated. Executed by the University of British Columbia (UBC) the project will last a total of two years, from December 2021 to November 2023. The III phase further updates and improves the forest adaptation tools developed in phase I and phase II of this project and introduces them to a wider user base by proving their superiority compared to other climate tools. This way they can be better used in developing forest adaptive strategies in the Asia- Pacific region to improve the health and productivity of forest ecosystems and their resilience to climate change. The previous two phases started in 2011, were also executed by UBC with 7 economies and regions targeted, including China, Chinese Taipei, Australia, Canada, Malaysia, and Myanmar. During this eight-year endeavour, important forest adaptation tools have been developed, including a scale-free climate model called ClimateAP, climate niche models for 15 tree species and 4 forest ecosystems, FORECAST models, and a web platform (climateap.net) to facilitate easy access to climate data and spatial visualization of climate data and species distributions.

Specifically, in the first phase, implemented between 2011 and 2014, a scientific and a policy review regarding the basic science of climate change were developed, and information on various policy measures in the Asia-Pacific region has been implemented to either adapt to or mitigate, climate change from a forestry perspective accumulated. ClimateAP, which is a high-resolution climate model, generates scale-free climate data for a large number of climate variables for historical and future periods. It serves as an essential tool for the entire region to facilitate and promote climate change-related studies and applications. Additionally, climate niche models for five major forest tree species in the region including Cunninghamia lanceolata (Chinese fir), Pinus Sinensis (Chinese pine), Pinus massoniana (Masson pine), Pseudotsuga menziesii (Douglas-fir) and Eucalyptus globulus (Blue gum), and their consensus projections were generated for future periods to provide a scientific basis for assessing the impact of climate change, identifying the most vulnerable species and populations, and formulating adaptive management strategies. Besides, a process-based model called the FORECAST climate model was also developed to identify key indicators of ecosystem services and the development of decision-support tools for evaluating alternative management strategies. To facilitate data access and spatial visualization of climate data and climate niche projections, a Google Map-based web tool (climateap.net) was developed to promote information flow and knowledge transfer from scientists to policymakers and stakeholders.

During the second phase of the project from January 2016 to December 2018, ClimateAP model was updated and expanded to allow for annual time series projections to be generated for any location in the region in a single run. With this development, ClimateAP can generate high-resolution climate data for historical years (1901-2017) and future years (2011-2100) in addition to the three future periods (2011-2040, 2041-2070 and 2071-2100) already included in the model. To facilitate policy discussions through scientifically credible evaluation of existing data and information, the second phase project conducted evaluations of adaptive forest ecosystem management strategies through model integration, development of indicators and trade-off analysis. It aimed to help policymakers and practitioners understand the complex systems that they are dealing with, as well as provided opportunities for addressing policy and data gaps to formulate alternative adaptive forest management strategies. In phase II, results of the integration of process-based FORECAST/FORECAST Climate and niche-based models, as well as input from local partners were used to conduct trade-off analyses at representative pilot areas in Southeast Asia (Myanmar and Malaysia). With this framework, Tenctona grandis (Teak) plantation productivity was forecasted under various future climatic scenarios and management alternatives (with or without bamboo competition, water balance and nutrients) using climatic data derived from ClimateAP, field data collection and local inputs. 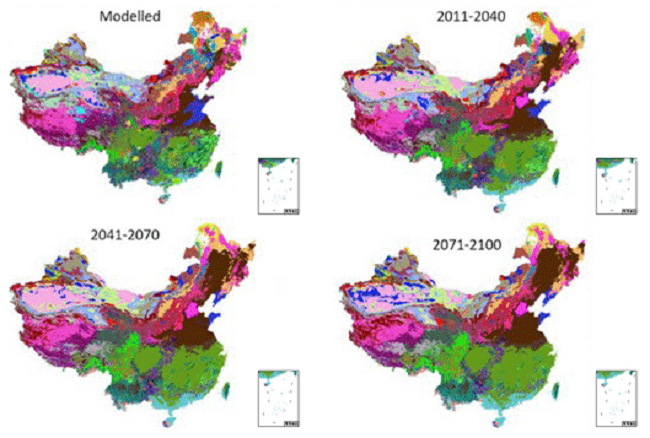 In this third phase, the project will focus on (1) summarizing climate niche models and their projections for 15 key species and 4 forest ecosystems to develop a framework where multiple species can be managed simultaneously; (2) updating ClimateAP to provide timely and superior climate data; and (3) disseminating project outputs of all phases to a wider audience. The new phase of the project will conduct additional analysis on the projections to include soil effects to integrate individual species into a framework showing species availability for any planting site for the current and future climates in connection with the forest ecosystem projections. To maintain and improve the functions of ClimateAP, newly available monthly climate data each year will be updated. The project will particularly incorporate recently released new climate projections of the Couple Model Intercomparison Project (CMIP6), which were included in the IPCC AR6 to keep the model updated with new annual and future climate data, and ClimateAP will be compared with the commonly used model WorldClim to demonstrate its superiority. The users of ClimateAP tool include all four economies and beyond (all economies in the Asia Pacific). The new phase of this project aims to substantially increase the number of users (subscribers) as the majority of climate change-related scientific publications still use WorldClim. Climate niche models have a great potential to guide the development of adaptive forest strategies to climate change. Phase III will furtherly refine and synthesize these tools for developing a framework for managing multiple species collectively. To disseminate model predictions and their applications in forest management for climate change adaptation the project will convert the Google Map-based application to an ArcGIS-based web platform for better interaction and global accessibility, particularly for users in China. Four policy briefs of four economies including China, Chinese Taipei, Malaysia and Myanmar will also be developed and the forest adaptation tools will be presented at international conferences.
Overall the third phase of the project will push the tools developed beyond the borders of their previous use and thus reach and involve a larger audience.