Over the past few years, more frequent and catastrophic forest fires have occurred around the world. Forest fires tore across the Brazilian Amazon, imperiling the world’s most biodiverse forests, and even the frozen lands of Siberia and Alaska have suffered unprecedented wildfires. Small-scale fires are a natural process to help the forests clear-off the underground shrubs and allow the forest to regenerate. However, large-scale, hot fires can cause considerable destruction to both forest ecosystems and human communities.

In China, forest fires happen frequently, especially in the winter season (from January to April) due to monsoonal influences, and the threat remains serious each year. Based on forest fire records provided by the Forest Fire Management Office of the National Forestry and Grassland Administration in China, the annual average number of fires in China between 2000 and 2020 was 6,283 (range from 1,153 to 14,144) and average burned area was 183,126 ha (range from 18,161 to 1,123,751). It is also estimated that the human-caused fires accounted for more than 95% of all forest fires. Therefore, the early detection of active forest fires is crucial in protecting forest resources and human communities whose livelihoods depends on the forests. Recently, with the digitalization of spatial information and new remote sensing technologies the detection and monitoring of forest fires has become more efficient. Human patrolling for forest fires have been partially replaced by high-tech forest fire auto-detection system.

Since 2014, APFNet has supported several economies (including Laos, Cambodia, and China) to install the “Forest Fire Monitoring and Early Alarming System (FFMEA)” through its demonstration projects, aiming to monitor forest fires and protect the forest resources. The FFMEA system is a state-of-the-art solution for monitoring forest fires, which uses front-end monitoring equipment installed on a tower in the forest area and back-end command and control platforms in the control center to automatically monitor fire outbreaks. The forest fire monitoring tower can be left unattended, monitoring in real-time throughout the day. The system’s precision turntable – the "forest watcher” - can cover a radius of 15km within 30 minutes and has a target positioning accuracy of within 100 meters. 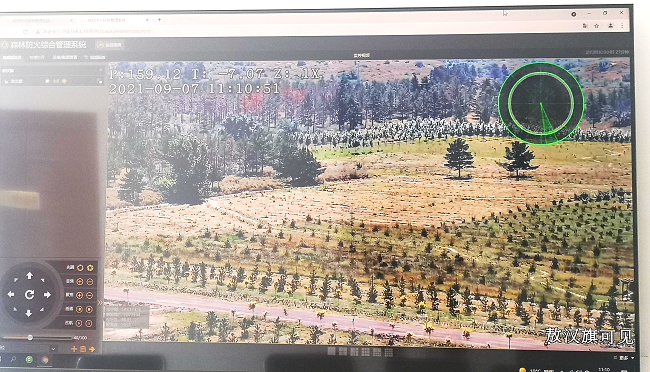 Since the system monitors forest fire automatically in real-time, it replaced the traditional manual fire monitoring with auto-detection. When the forest fire is detected, location of the fire will be rapidly located using the GIS module, and the system will automatically inform the responsible person at the control center. The optimized routes to reach the firing area will be suggested, and the system is also able to analyze and forecast the trends of the fire which supports the decision making on fire fighting. ‘It’s the first time for our forest farm to install such intelligent forest resources protection equipment, now we are ever more confident that we can extinguish forest fire in a timely manner in the future’, said Chen Mingchuan, Director of Sanyijing Forest Farm of Aohan Banner.