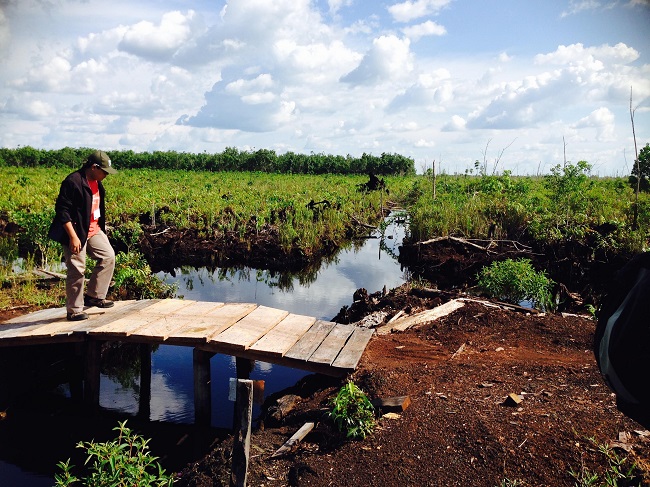 With each year passing, climate change mitigation becomes a more pressing issue for economies all across the world. As one of the top emitters with vast natural resources, this mainly applies to Indonesia. Yet, opposed to the emission sources from developed economies, Indonesia's GHG emissions do not primarily result from industrial activity but rather derive from the land-use sector. In particular, the degradation and burning of peatlands contribute nearly 50% of the emissions from the land-use sector. Yet until recently, the calculations these emissions were based on remained highly uncertain, preventing the Indonesian government from reporting emissions from peat fires to the UNFCCC under its international commitments to combat climate change.

Recognizing this issue, at the beginning of 2019, APFNet teamed up with the Forest Research and Development Center (which has subsequently been reformed and renamed the Center for Standardisation of Sustainable Forest Management Instruments) under the Ministry of Environment and Forestry (MOEF) of Indonesia, as well as the University of Melbourne of Australia. The project's goal was to include more factors, such as fire frequency, fuel loads, combustion factors for above-ground carbon and peat, in a new methodology that considers how different fuels contribute to the overall emissions resulting from peatland fires. Two years later, during the online completion workshop held on March 7, 2022, the partners were happy to report that this new methodology was developed and applied to national reporting.

After initial opening remarks by Mr Ary Sudijanto, the Director-General of the Agency for Standardisation of Environment and Forestry Instruments MOEF, Dr Ian Woodrow of the University of Melbourne, Ms Anna Finke, the Division Director of the Project Management Division of APFNet, Ms Nikki Fitzgerald from the Department of Industry, Science, Energy and Resources (DISER) and Dr James Quilty from the Australian Centre for International Agricultural Research (ACIAR), the project team presented their findings. Professor Haruni Krisnawati, the project coordinator, introduced the project's background and key findings. These include that in traditional calculation methods, pyrogenic carbon has mainly been ignored but is an essential contributor to peat fire emissions. Even more importantly, the project team determined new combustion factors (CFs) for the different components of the peat landscape and compared them to the standard elements given by the IPCC. In this context, the combustion factors of peat (from 10 cm to 50 cm depth) can be 30-60% lower than the defaulted CF provided by the IPCC guideline, meaning that emissions resulting from peat itself maybe two to four times lower than the values calculated by the IPCC default CF. 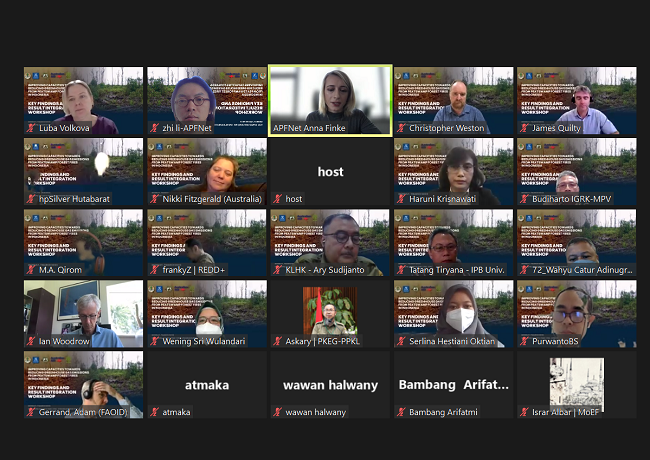 Group Screenshot of some of the participants. Photo: Li Zhi/APFNet

During the next presentation, Mr Budiharto, the Directorate of the GHG Inventory and MPV of the MOEF, introduced the impact of the project on Indonesian emissions reporting to the UNFCCC. He was pleased to say that the study findings were already used in the 2nd Forest Reference Emissions Level (FREL) report submitted in January 2022. He pointed out that the next step will be to re-calculate the emissions from peat fire of older statistics for the following reporting to maintain consistency between reports by using the same calculation method.

Dr Luba Volkova compared in her presentation different fire emission estimation methodologies, the FREL method and the IPCC method, as well as some non-IPCC variants with each other and how Indonesia's emission calculation, which is currently using FREL, is impacted by using one vs the other. She also compared fire emissions in different peatlands, concluding that the highest emissions stem from fires in long unburnt peat forests, as it combusts a high amount of above-ground fuel that takes centuries to regenerate. In contrast, degraded peatlands can recover the amount of carbon stored in as little as three years.

After the PhD students supported by the project gave brief presentations, the workshop moved on to group discussions, where participants could raise questions regarding methodology and other concerns. Ideas on what should be included in the future, such as decomposition factors, and what should be done to reduce the number of peat fires in the region were raised. Dr Luba Volkova introduced, based on her research, the idea that special efforts in protecting primary forests, as they release much more carbon than previously burned forests, might contribute significantly to Indonesia's emissions reduction efforts.

Finally, the workshop was wrapped up, leaving the participants with the deep impression that the APFNet funded project already achieved one of its key goals of getting adopted into official reporting.

As Professor Ian Woodrow remarked, "the project is a global significance, the result is outstanding, and it will improve the understanding of the global carbon pools". Overall, the workshop and the project itself can be considered highly successful.

No more
Join APFNet at the webinar “Restoring the Earth: the next decade”: an introduction to Unasylva 252!