"Drought is not just the absence of rain; it is often fueled by land degradation and climate change. Together, we can overcome its devastating effects on people and nature around the world and start preparing now to drought-proof our future."

this widely acknowledged that restoring vegetation in sandy areas is an effective way to reverse precisely this kind of land degradation and improve land quality. This especially applies to economies in the Greater Central Asia (GCA) region, where a number of demonstration projects have already indicated the potential of this method. 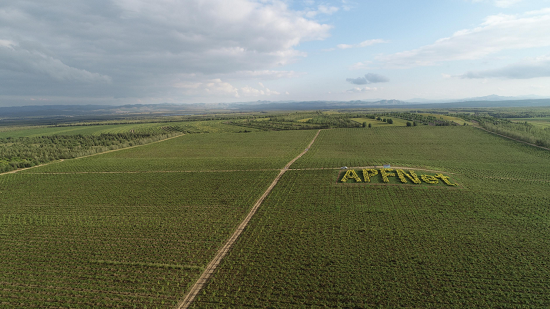 Restoration in Aohan Banner, Inner Mongolia with mixed species; Photo: Sanyijing Forest Farm
To contribute the knowledge base regarding these methods and effectively demonstrate desertification control and forest rehabilitation in the GCA region, APFNet has been actively collaborating with partners in this region since 2014, through supporting the Meeting of Ministers Responsible for Forestry in GCA (MMRF-GCA) and organizing the Regional Workshop on Strategic Forestry Cooperation, as well as the demonstration projects themselves. Starting from 2017, APFNet has supported two phases of the project “Demonstration Project of Vegetation Restoration and Management and Utilization of Forest Resources in Greater Central Asia” in Inner Mongolia, China, to demonstrate desertification control and vegetation restoration in such kinds areas. The project analyzed typical approaches for desertification prevention in Inner Mongolia and provided practical examples of forest restoration, including innovations on the classical shelterbelt forest. It demonstrated high-quality vegetation restoration in sandy lands using different afforestation models, and also showcased a selection of economic tree species, suited to local conditions, to improve forest stand quality and provide multiple benefits for local people.
During Phase I, the project established 70 ha of restoration demonstration forests in sandy areas, including a 30 ha demonstration site that mixed Mongolian pine (Pinus mongolica) and Xinjiang poplar (Populus alba), and 40 ha of demonstration forest mixed with Mongolian scotch pine (Pinus sylvestris) and the valuable yellowhorn (Xanthoceras sorbifolium). Additionally, 39 ha of orchards, classified as economic forests in China, have been established to showcase the management of different apricot species. These demonstration sites not only bring economic benefits to the region, but also are a form of forest restoration, and thus combat desertification and improve the soil. Based on Phase I of the project, Phase II has demonstrated more mixed forest restoration models to improve forest quality. The implementation area of Phase II is 230 hectares, which includes the establishment of 72 ha of a semi-arid demonstration forests mixing Mongolian scotch pine with new species such as Siberian elm (Ulmus pumila), winged euonymus (Euonymus alatus) and purpleblow maple (Acer truncatum Bunge). Furthermore, around 38.66 hectares of existing degraded poplar monocultures, established during reforestation efforts decades prior, were restored by enriching the area with other species. Finally, in order to showcase the sheer possibilities in terms of species to select for restoration in arid areas in general, APFNet built a 10 ha sand-tolerant tree species garden featuring 80 common sand species, and constructed an exhibition room to showcase different sand control and prevention measures. 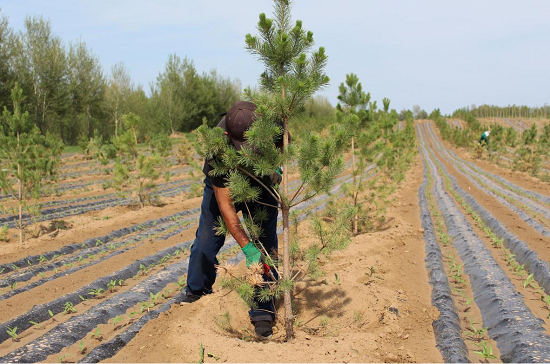 Before (left) and after (right) planting of mixed coniferous and broadleaved trees; Photo: Sanyijing Forest Farm
In celebration of the World Day to Combat Desertification and Drought 2022, as a regional forestry organization, APFNet commits itself to continue to play an active role in combating desertification and drought, and strengthen community participation and cooperation at all levels.